by raindeocampo 5 years ago5 years ago
11kviews
0

Ever since I was a child, born and raised in Pasay City, I have known Metro Manila to be a place of extreme contrast especially during the late 70s – one side is a clear reflection of the country’s poverty and on the other side, a glimmer of hope from a global symbol of the country’s rich culture and national pride.

For out of the 88 hectare reclaimed land along Roxas Boulevard and the Manila Bay area, arose the very ambitious structural project of the Marcos regime that is now known all over the world as the Cultural Center of the Philippines Complex.

The complex would later include the Philippine International Convention Center (PICC), Folk Arts Theater (Tanghalang Francisco Balagtas), Manila Film Center, Sofitel Philippine Plaza Manila and the Coconut Palace. And most recently in the last two decades; the Star City Amusement Park (1991) and Harbour Square which is home to dozens of restaurants and other food establishments.

Two Saturdays ago, I went on a little tour inside the Philippine International Convention Center (PICC) with a couple of blogger friends right before watching the show of renowned stand up comedian Russell Peters for his Deported World Tour in Manila held at the PICC Plenary Hall. Our tour guide and gracious host is Ms. Portia Granados Cabiad.

In my lifetime, I think I have been to PICC for about 5 or 6 times only and that’s either only at the lobby, the Plenary Hall or the Forum which was the multipurpose tent built outside the PICC main building used mainly for trade exhibitions and events.

So that tour that we did was like my first time to see what’s on the inside of this 42 year old iconic structure in Manila.

Formally inaugurated on September 5, 1976, ten years after the founding of CCP, the PICC is the first international convention center in Asia and was built using Brutalist architectural aesthetics under the helm of National Artist Leandro V. Locsin, who also spearheaded the designs for the Tanghalang Pambansa (CCP), Folk Arts Theater, the Church of the Holy Sacrifice in UP and several structures at the National Arts Center in Los Banos, Laguna.

PICC has since played host to the most celebrated, the most influential, and the most admired figures in the world. Through generations, it has displayed its many facets to host multitude of events that entertain, celebrate, or dignify. Whenever an event is held at the PICC, no matter what it is, it leaves an indelible mark, not only on the Philippines, but also on the rest of the world. 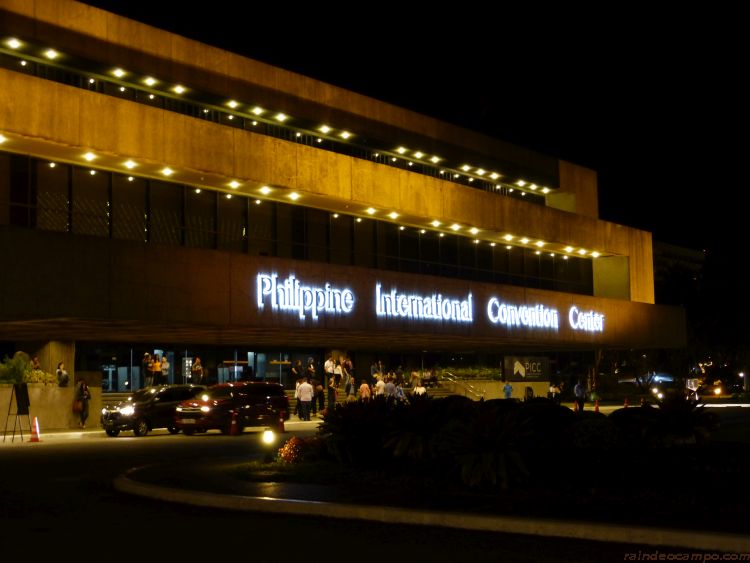 HOST TO THE WORLD

The convention center was finished just in time for the International Monetary Fund (IMF) – World Bank Annual Meeting in 1976 – its first international event.

Two beloved saints have also visited PICC in the past – St. Teresa of Calcutta who attended Rotary International in 1984 and Pope St. John Paul II during his World Youth Day visit in the Philippines and on the occasion of the Catholic Mass Media Awards in 1995. 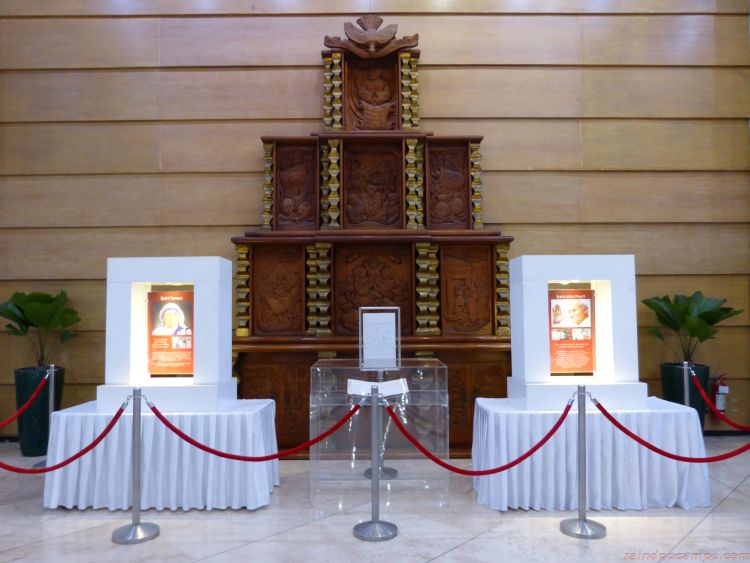 PICC have played host to a lot of international events since the IMF-World Bank meeting such as the World Chess Olympiad in 1992, Miss Universe Pageant in 1994 and most recently the APEC Economic Leaders’ Meeting in 2015.

World class Filipino talent Lea Salonga who was awarded the PICC Gem during its 40th Anniversary declares that PICC is her favorite concert stage. Lay preacher Bo Sanchez also uses the PICC Reception Hall as the venue for the weekly gathering of “The Feast” while majority of schools and universities in and out of Metro Manila favors the PICC as the graduation venue for their students.

Situated at the heart of Manila, PICC is currently composed of five (5) building modules: the Delegation Building, Secretariat Building, Plenary Hall, Reception Hall and The Forum. 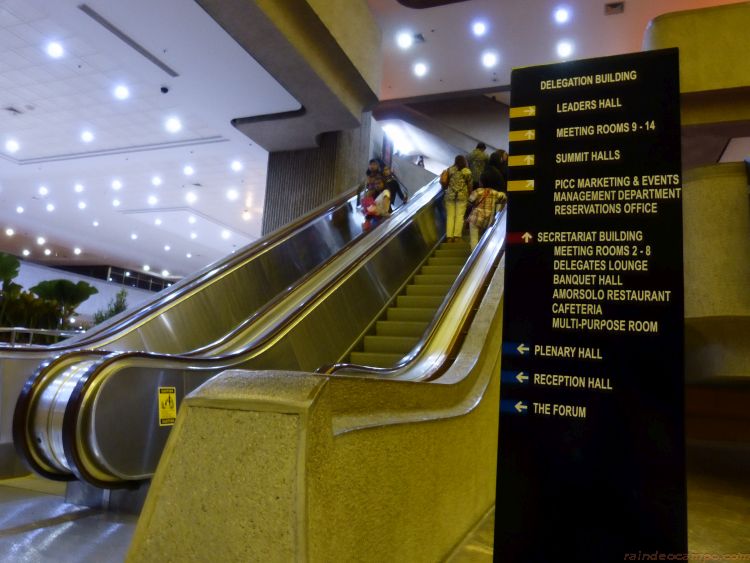 Some of these areas will be modified soon for the addition of two new structural projects:

The construction for these two structures are currently on going.

Here’s a breakdown of PICC’s hosting capabilities by modules:

The centerpiece of the PICC complex is this awe-inspiring and breathtaking Plenary Hall theater that has a total capacity of 3,859 people divided into three levels: Ground, Balcony (2F) and Gallery (3F). 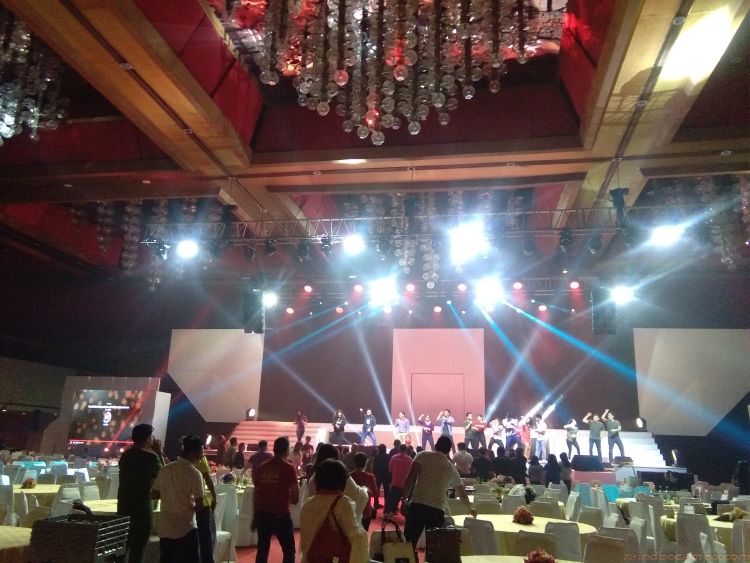 This venue is designed to host various types of formal occasions – from cocktails to full-course dinner events. The Reception Hall can accommodate up to 2,680 guests seated in a banquet or up to 4,110 in theater arrangements. 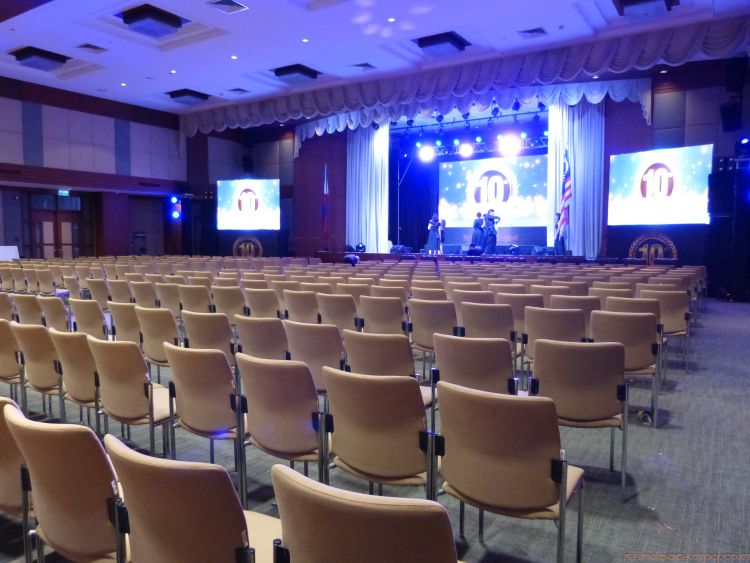 These two buildings houses offices and several types of meeting rooms for small to large number of delegations. 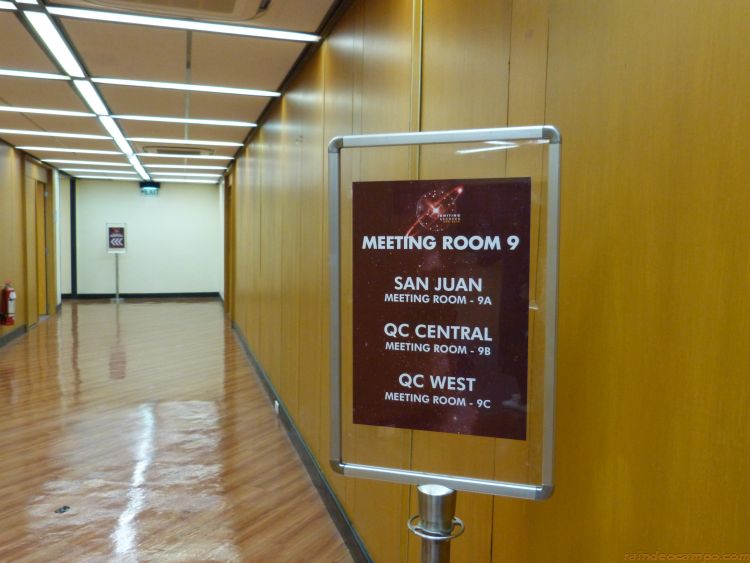 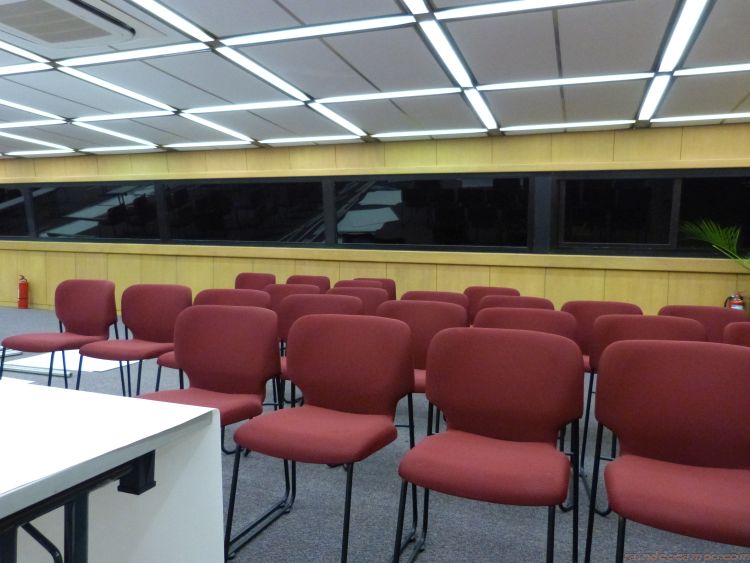 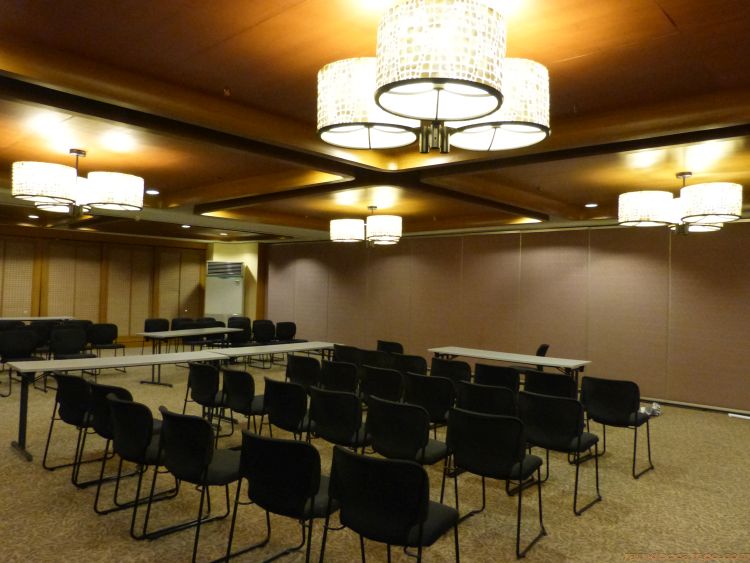 THE COURTYARD and GARDEN

These are PICC’s outdoor venues that can either host chic cocktails or banquets. It is enhanced by the iconic mural of National Artist Jose Joya “Ang Pagdiriwang” displayed at the main lobby and punctuated by the “Anito” sculpture created by another National Artist, Arturo Luz. 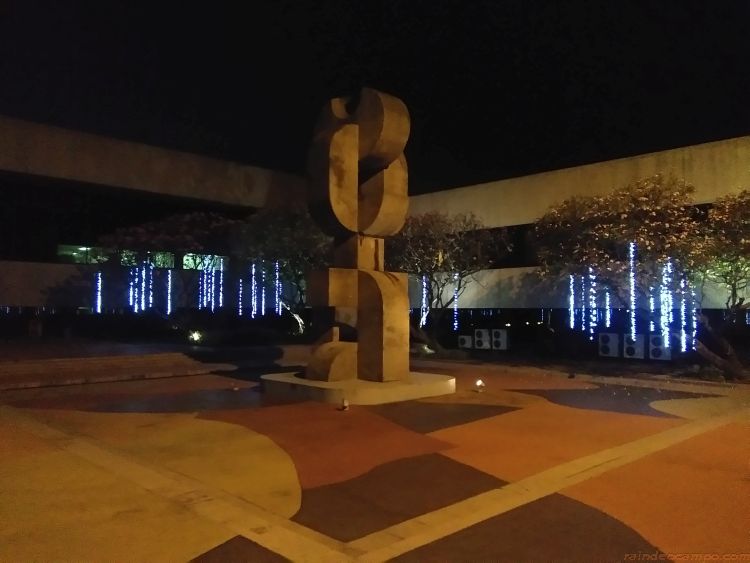 Speaking of the arts, from the walls to the seats and the ceiling, PICC is home to many artworks made by national and international artists. 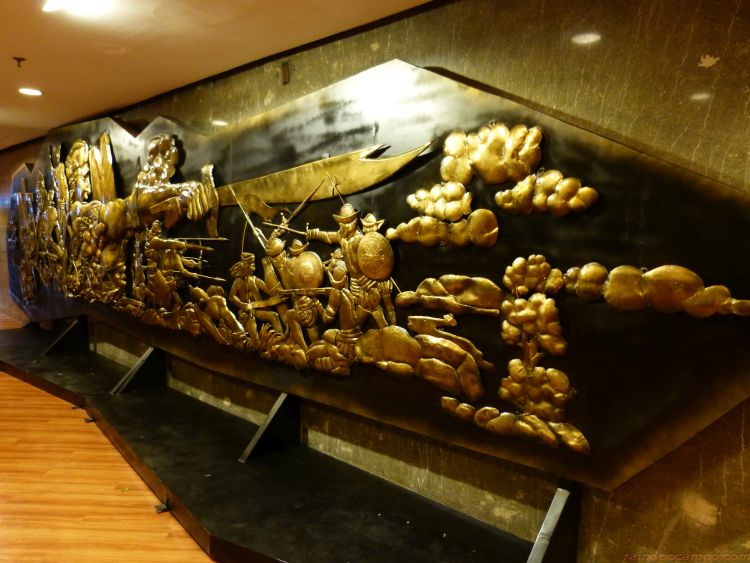 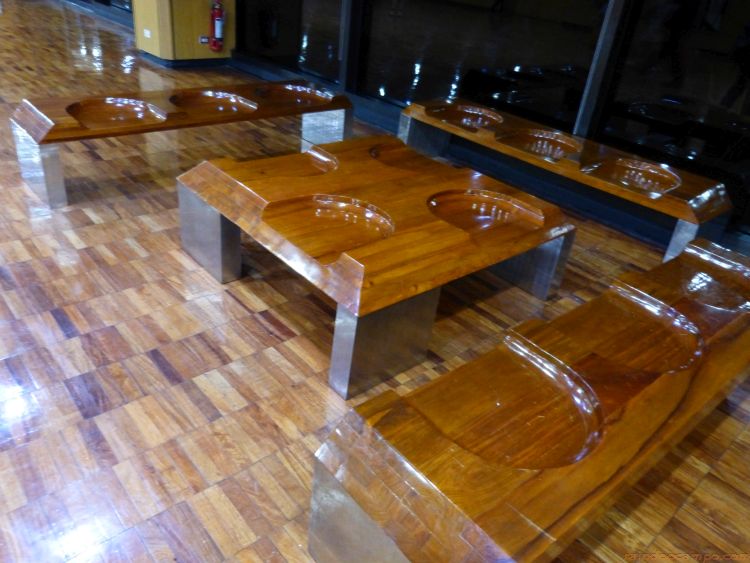 The thousands of ceiling droplights at the main lobby is in itself, a sight to be hold – or in millennial term, an IG-worthy background. PICC is also a full-serviced venue with ancillary facilities such as registration and document distribution counters, lounges and a cafeteria. They have an on-site exclusive food caterer and concessionaire pus a fine dining restaurant – Amorsolo. The center is also a Wi-Fi zone with support for web casting, video broadcasting and conferencing. All function and meeting rooms have dedicated wired and wireless local area network. Security is also not a problem. PICC is equipped with strategically placed CCTV cameras, baggage x-rays, metal detectors and roving security personnel. In terms of structure, not much has changed with the place since its inception more than 40 years ago and there’s really nothing they can do about that since the center is already considered as a local heritage site. However, not known to many, PICC has been evolving and adapting to the needs of the times. They may not be the newest or the biggest convention center and events venue in Mega Manila, but they are still the FIRST in the whole of Asia. That alone, is the probably the best reason to consider PICC as the next venue for your next big milestone.