A month-long celebration awaits members of the ever growing realme community in the Philippines as organizers broaden the scheduled realme Fanfest with lots of activities PLUS the launch of realme C15 smartphone.

realme C15 is the first smartphone to pack a power combo of a 6,000mAh battery and an 18W Quick Charge. It also features an octa-core processor, a 6.5 inch LCD screen with high screen-to-body ratio, and an ultra-wide Quad Camera set-up.

It will be officially launched here in the Philippines on August 20 (Thursday) at 6:00 PM. To showcase its battery capability, the device’s livestream launch will begin August 19, 7:00 PM at the realme Philippines official FB page and YouTube channel. 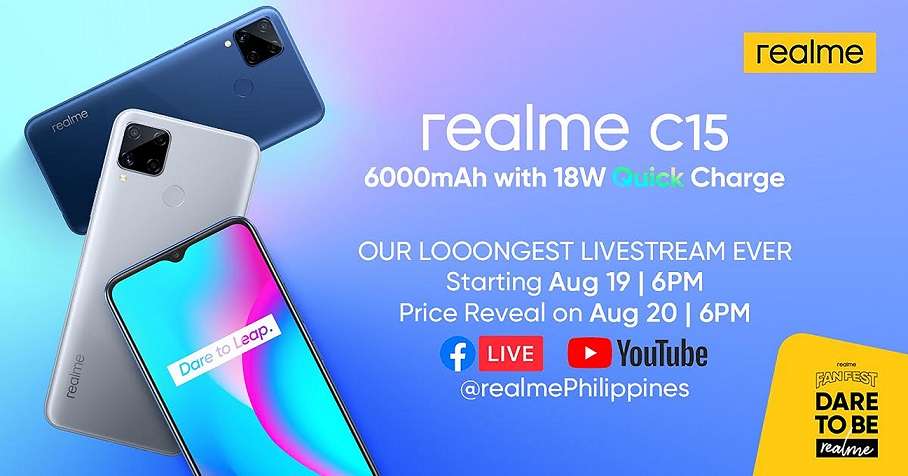 With the aim of fostering camaraderie among realme community members amid the quarantine protocols and social limitations practiced across the country, the cool people behind realme Philippines created the realme Fanfest as a way also for them to express their gratitude to customers who have propelled the brand’s growth in the past year and a half.

“August is such an exciting month for all of us at realme. We are determined to strengthen our connection with our fans who we immensely treasure. You inspire us every day. We hope that through all of the activities we have prepared for you, we can share a big smile as one community this entire month,” realme Philippines VP for Marketing Austine Huang shares. 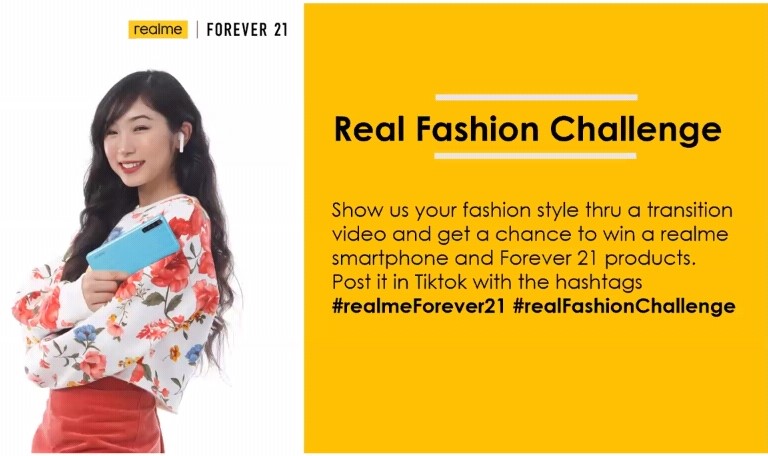 Dare to win more prizes by spotting the realme Angkas

realme Fans must keep their eyes on the road until August 30 to Spot the Angkas! realme Philippines and the motorcycle-taxi company will be deploying 500 Angkas riders around the metro wearing a realme face mask and bearing a realme sticker and flaglet. To join, participants  must take a clear photo of the realme Angkas rider they see either on the road or at home upon the delivery of the participant’s padala or pabili. The photo must have the rider’s plate number. They then must post the photo publicly on Facebook with the hashtag #realmexAngkas. 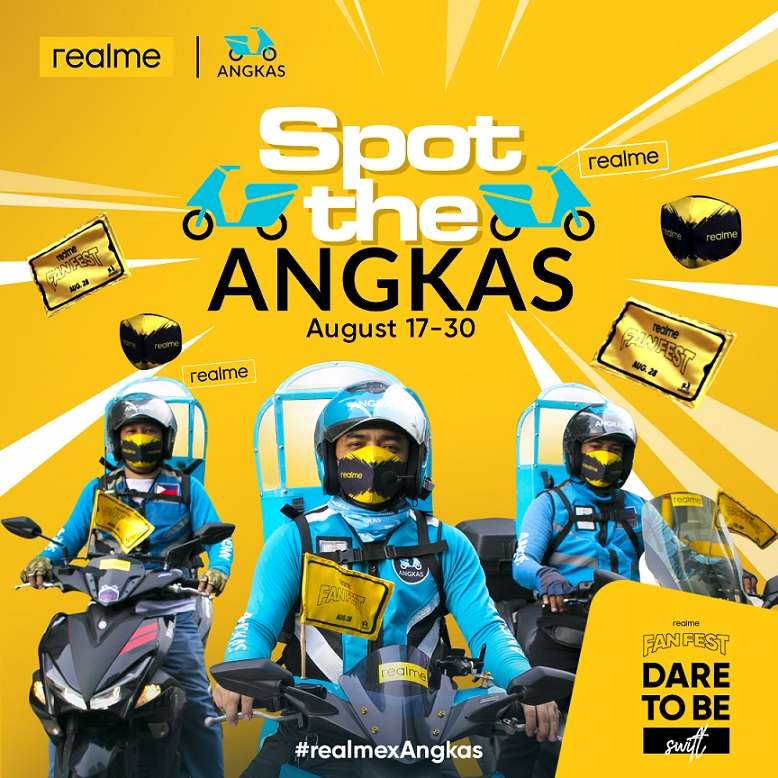 After validation by the realme and Angkas teams, two uploaders plus the Angkas riders whose photos have been snapped will win realme AIoT products. realme Philippines reminds participants to take snaps safely, following both road and health protocols.

Dare to be an official TikToker to win

TikTokers! Hit the like button, follow pages and upload videos from August 15 to 28  to win realme devices and Lazada vouchers. Those who wish to join the challenge may visit Tiktok Treats on TikTok. Each accomplished task has a corresponding point that will be added to the accumulated points of the participant. The total points earned can then be used to redeem prizes! The yet to be launched realme C15 and smart wearable realme Watch for instance can be claimed for 45,000 points each. 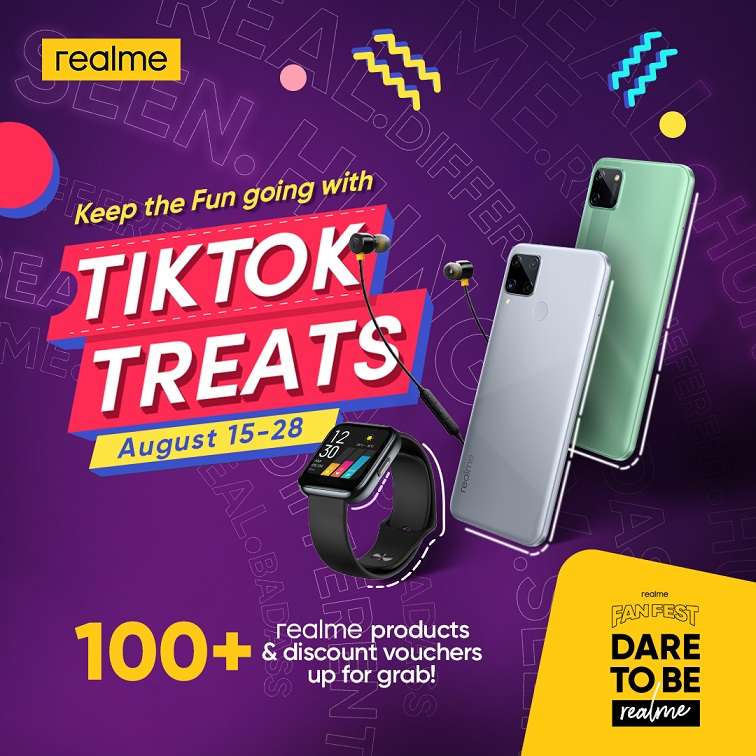 Dare to be a mobile gaming champion

realme ups the ante for the third season of the realme Mobile Legends Cup! The stakes were made higher this season as participants battle their way to a bigger prize pool of Php 300,000, done in partnership with Logitech G, Xtreme Appliances, Coda Shop, Home Credit, Poli Prints and ASUS Routers. Fans are encouraged to tune in during the gaming livestreams on the official Facebook page of realme as a lot of surprises will be announced during the program. Show starts this Wednesday, August 19 at 1:00 p.m. 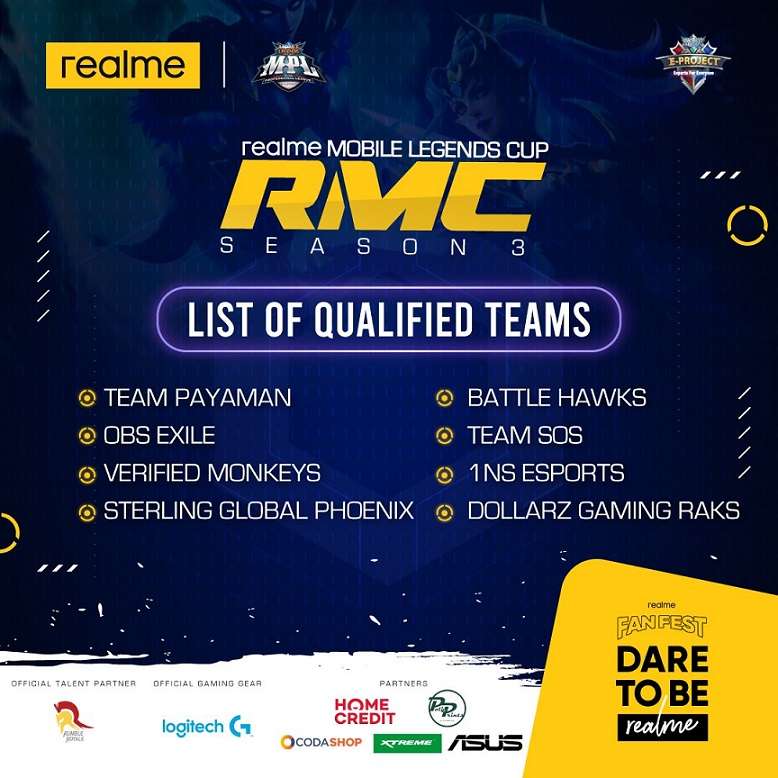 realme fans are certainly in for a lot of amazing surprises this August!