by raindeocampo 1 year ago1 year ago
224views
0

Yes, the country’s leading pay-TV provider, Cignal TV, is partnering with free-to-air television network TV5 to offer some of the best entertainment programs while adapting to the new normal way of living.

“TV5 is known to bring the best content on sports and news. Collaborating with Cignal will allow us to strengthen our program offerings,” says Cignal TV & TV5 Pres. and CEO Robert Galang.

With Cignal TV’s 2.5 million subscribers and nationwide reach, combined with TV5’s innovative and creative expertise, the partnership aims to bring Filipinos together through meaningful, relatable programs that will elevate the home viewing experience.

Coming to the television screens starting August 15, 2020 (Saturday) is the first wave of TV5’s entertainment programs. It starts off with highly anticipated back-to-back game shows headlined by some of the country’s top hosts and comedians; and will be followed by lifestyle programs to spruce up your mornings and way of life!

Bawal na Game Show (BNGS) is the comic relief that we need now, as it pokes lighthearted fun at our current situation. Hosted by talented and well-loved comedians Wally Bayola and Paolo Ballesteros, the game show revolves around being told what you can’t do (ie. bawal tumawa, bawal gumalaw) in order to win!

Wally and Paolo—as twins Bebe Gurl and Barby Gurl, respectively—will present challenges to the contestants, but they will also distract and goad the players to break the rules. The last pair standing will take home the grand prize of Php100,000. The show will air every Tuesday, Thursday, and Saturday following its pilot episode on August 15!

Fill in the Bank is the newest game show that gives contestants a chance of winning up to Php150,000 in every episode, while keeping viewers entertained. It will be hosted by star comedians Jose Manalo and Pokwang. 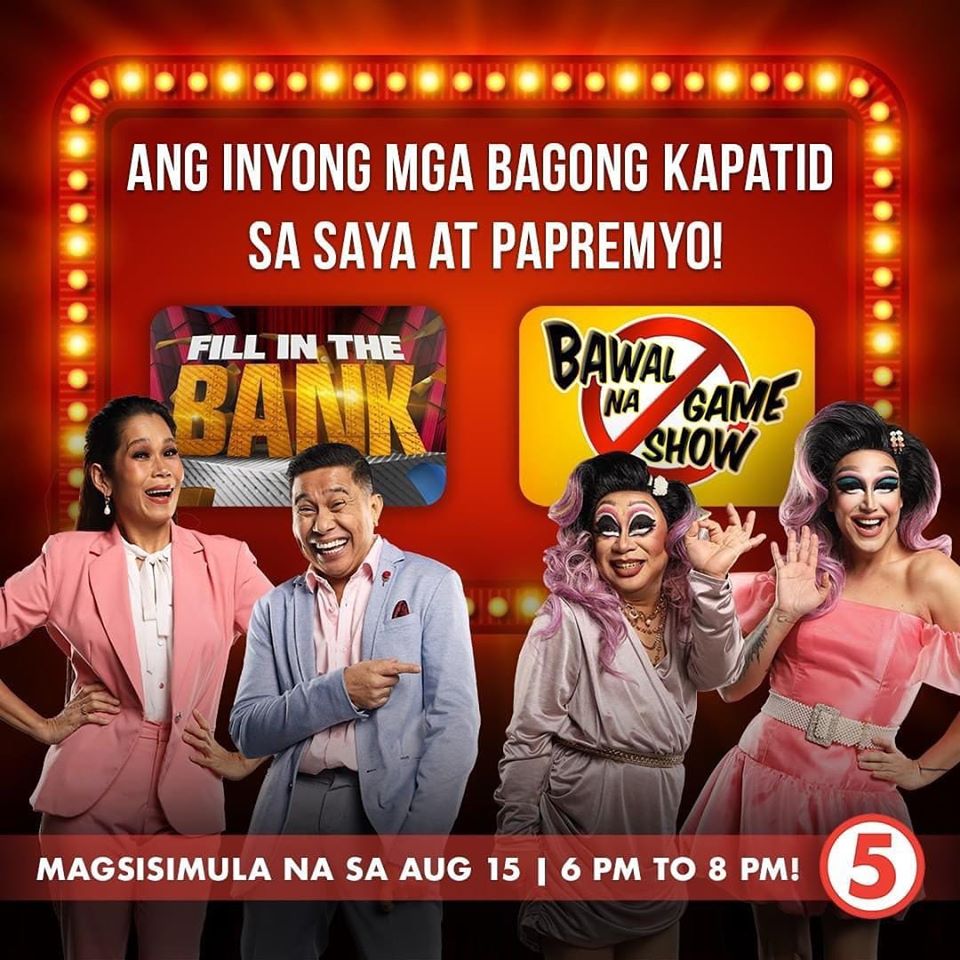 The hosts will likewise take on a fictional character: Jose as Chief Echoserong Officer (CEO) “Manedyer Jose” and Pokwang as Chismosang Falakang Officer (CFO) “Madam Poke.” They and the rest of the show are set to tickle the funny bones on Monday, Wednesday, and Friday evenings!

Coming on the heels of the game shows is Bangon Talentadong Pinoy, which puts the spotlight on the diversity and ingenuity of Filipino talent. It boasts of the total cash prize of P2.8 million, in which a larger number of contestants can win anywhere from P2,000 to P5,000 to P50,000 and even up to P250,000!

Ryan Agoncillo returns to TV5 to host the reboot of the iconic Talentadong Pinoy. Now known as Bangon Talentadong Pinoy, the much-awaited TV show will make its comeback on August 15 (Saturday), 8:00 PM and will air every Saturdays on the same time slot in TV5.

Televiewers will also get to see a different side of Luchi as she opens up about issues that she has never talked about on Usapang Real Life with Luchi Cruz-Valdes. Set to premiere also on August 15 (Saturday) at 9:00 PM, the show will delve into various narratives and inspiring case studies that aim to inspire, engage, and move viewers into action.

Lifestyle programs are likewise part of the new and improved programming lineup of TV5 in partnership with Cignal TV, the number one direct to home (DTH) satellite provider in the country. First off, there’s the fitness show hosted by actress and fitness enthusiast Jessy Mendiola called Fit for Life.

The people behind the show recognizes that now more than ever is the best time to make fitness a way of life. As health officials around the world tell us, being healthy is our best defense to weather the ongoing global health crisis. Fit for Life can make this achievable as it kicks off on August 16, 2020 (Sunday), 7:00 AM, and becomes the healthy Sunday routine.

As the show’s host, Jessy will lead viewers to an hour packed with full-body exercises, easy-to-prepare health dishes, inspiring discussions, and expert tips to jump start your way to a healthier lifestyle!

Then there’s Chika, BESH (Basta Everyday Super Happy), the morning show that’s guaranteed to make televiewers look forward to waking every morning. It will impart reliable information and positive stories that will surely make the start of the day happy and enjoyable for all.

Headlining the morning show are Pokwang, Pauleen Luna-Sotto, and Ria Atayde. They are set to bring pure good vibes into your mornings with their genial personality and cheerful spirit. They will also cater to the needs and issues concerning women of all ages and walks of life. Catch the pilot episode on August 17 (Monday) at 10:00 AM, and will be airing Mondays to Fridays.

Indeed, excitement and optimism abound with Cignal TV and TV5’s new offerings. This collaboration brings together Filipinos through a wide range of quality and innovative shows and programs that make all of us informed about the country’s most pressing issues and entertained as well.  Just tune in to TV5 beginning Saturday, August 15, 2020! There’s only more to expect from your favorite Kapatid Network!