UP To Screen Imelda Marcos Documentary “The Kingmaker”

by raindeocampo 2 years ago2 years ago
121views
0 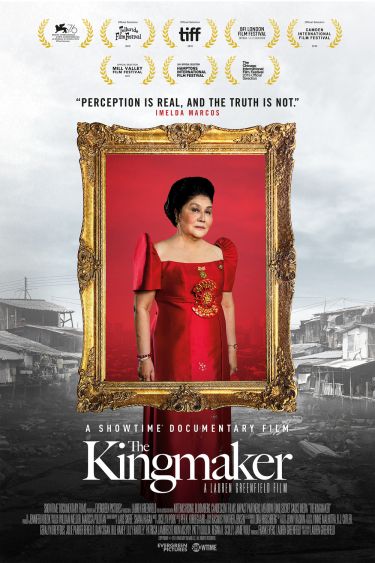 Due to popular demand for more screenings of the critically acclaimed documentary film “The Kingmaker”, the University of the Philippines Film Center, Dakila and Active Vista will mount an on-campus screening at Cine Adarna on Wednesday, January 29, at 7 p.m.

The UP screening coincides with the 50th anniversary of the First Quarter Storm, the 1970 student leaders protest against the government of Ferdinand Marcos that prompted the declaration of Martial Law in 1972.

A gala screening will be held at the Cultural Center of the Philippines on Jan. 29 as well.

The documentary by Emmy Award-winning filmmaker and photographer Lauren Greenfield centers on former first lady Imelda Marcos, the wife of the dictator Ferdinand Marcos whose regime was stained with atrocities including human rights violations, disappearance of political dissidents, and widespread corruption.

“The Kingmaker” highlights Imelda’s confident rewriting of the Marcos family’s disturbing legacy with a narrative of a matriarch’s extravagant love for her country.

Beginning in 2014, Greenfield conducted interviews and filmed verité footage with Imelda Marcos herself, chronicling her present-day effort to restore the family to power in the Philippines, as well as filmed Bongbong Marcos’ 2016 vice-presidential campaign.

During the same period, Greenfield also talked to victims of the Marcos regime, from former Martial Law detainees to an elder Calauit resident who had been evicted from the island to make way for the Marcos’ private menagerie.

The 100-minute documentary had its world premiere at the 2019 Venice Film Festival, followed by screenings at the 2019 Telluride, Toronto, and London Film Festivals—the first documentary film to be invited to all four of these top festivals. “The Kingmaker” has since garnered a Writers Guild Nomination, three Critics’ Choice Nominations, as well as the Critics’ Choice honor for the “Most Compelling Living Subject of a Documentary.” 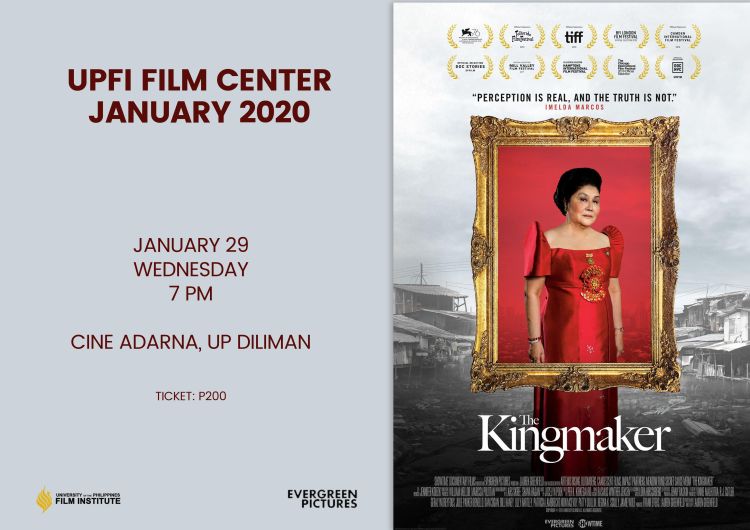 The screening will begin at 7 pm, followed by a panel discussion. Get tickets for Philippine premiere of “The Kingmaker” at http://bit.ly/TicketsKINGMAKER or purchase them directly at the UP Film Center Ticket Booth on the screening date for 200 pesos.

Follow Me
Latest posts by raindeocampo (see all)
documentary, imelda marcos, the kingmaker, UP