GMA actress RHIAN RAMOS Gears Up for the Race of...

by raindeocampo 7 years ago7 years ago
136views
0 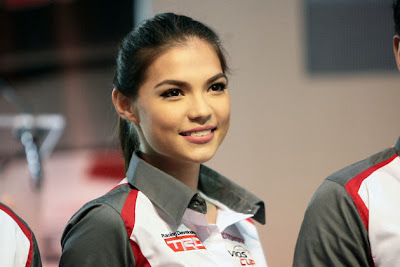 During a presscon of GMA Network’s new primetime show ‘Genesis’, RHIAN RAMOS shared how happy she is to be a part of the series which began production barely a few months after her previous series ‘Indio’ aired its grand finale.

She portrays a physically abused wife saved by a long lost love – Isaac (Dingdong Dantes) – who is the real father of her child.

Directed by Bb. Joyce Bernal and Mark Reyes, “Genesis” will air its pilot episode on Monday, October 14 on GMA Telebabad.

Apart from working on the series, Rhian is also seriously preparing for a car racing event organized by a popular car manufacturer on Saturday, October 12, at the Clark International Speedway in Pampanga.

Rhian said she was drafted from around thirty celebrities who were given several tasks to complete during a press event.  The final celebrity racers were selected by the organizers based on how they performed the tasks.

To prepare for the race, Rhian enrolled in a five-week course at a popular racing school. The actress said it is a requirement for the race.  She said that all racers were required by the organizer to undergo at least five weeks of intensive training.

Joining Rhian Ramos at the race track is Aljur Abrenica.  It is the first time for both Rhian and Aljur to join a car race although Rhian said that Aljur has tried motor races in the past.

The actress is not expecting to land first place but said she is hopeful that she won’t end at the bottom.

The “Genesis” star is getting hooked on the sport and she feels that the October 12 race won’t be her last.