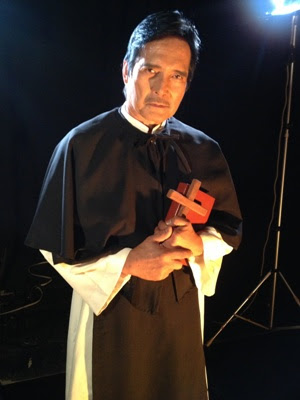 Actor ROI VINZON, who plays as the homophobic retired army general Armando Soriano in the GMA primetime series “My Husband’s Lover,” was spotted this morning inside a studio at the GMA Network Center donning a habit (religious vestment) similar to the vestment worn by Dominican priests during the Spanish colonial era of this country’s history.

The action star has always been negatively typecast because of his past roles as drug lord, rapist, corrupt public official, criminal with a calloused conscience, among others.

Roi will be part of a yet confidential TV program, which will air this October.

Details of the said project will yet be revealed but from what we know so far, the cast will include a relatively new kapuso actor who is a relative of another popular actor from a different network and an established young actor who has been creating buzz lately in the independent film arena.  The said actor is a member of a clan of revered actors although he uses a different family name.

Watch out for this TV program soon!

Meanwhile, as “My Husband’s Lover” nears its finale week, viewers are getting more and more hooked on the series.

The show’s finale episode will air on October 11 and a thanksgiving concert will be held the following day, October 12, at the Araneta Coliseum.

Tickets to the “One More Try: The MHL Concert” are available at all Ticketnet outlets and may also be purchased online at the Ticketnet website.